License to pawn: deals, steals, and my life at the Gold & Silver 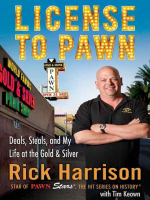 Description
"Full of colorful characters and the fascinating wheeling and dealings of the pawn shop Rick Harrison owns and runs with his father and his son, Licence to Pawn is a tie-in to Pawn Stars, one of the most popular shows on all of cable. It will take readers behind the scenes of Harrison's family-run pawn shop and bring its lovable cast to vivid life on the page. But it will also present Harrison's amazing personal story. While he registered a near-200 IQ at an early age, Rick developed a similarly uncanny ability to find ever-deepening trouble that nearly ruined his life. Yet the birth of his son and a reconnection with his father would bring Harrison peace at a time of desperation and, together, they would build the booming business where The Antiques Road Show meets American Chopper and millions of viewers--and potential readers--find they cannot get enough"--
Also in This Series