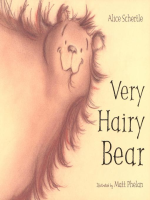 Description
All through the year, this shaggy, raggy, rumbly, bumbly bear faces down whatever comes his way: bee stings and scolding squirrels, cold rushing rivers and prickly bushes. And he does it all with a spring in his step and a smile on his face. There's just one thing he can't abide. Luckily, he knows exactly what to do about it. Season by season, Alice Schertle and Matt Phelan lead us through a year in the life of a charming, resourceful, and quite hairy bear. AUTHOR Alice Schertle has written numerous books for children and won many awards. ILLUSTRATOR Matt Phelan is the illustrator of the Newbery Award winner The Higher Power of Lucky and its sequel, Lucky Breaks (Atheneum), both by Susan Patron, as well as the Harcourt books Very Hairy Bear by Alice Schertle and Big George by Ann Rockwell. You can visit his website at www.mattphelan.com REVIEW 'Schertle's patterned language sets up a playful cadence that Phelan captures perfectly in his soft-lined, buttery-yellow pastels. He's a bear of rare appeal, and it's hard to resist the urge to snuggle down next to him.' (starred review) AGES: *
Also in This Series