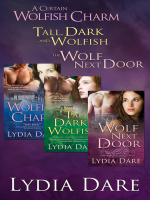 In Lydia Dare's debut trilogy, Regency England has gone to the wolves! Praised by readers and by reviewers as delivering "tension-packed romance... sizzling hot, sensual" (Star-Crossed Romance), Lydia Dare is one of the most-acclaimed new writers around. Now find out why with the first three Lydia Dare books for one low price. This bundle includes A Certain Wolfish Charm, Tall, Dark, and Wolfish, and The Wolf Next Door, each a rousing, fun, thrilling read with heroes and heroines who will take your breath away. "Tough, resourceful, charming women battle roguish, secretive, aristocratic men under the watchful eye of society in Dare's delightful Victorian paranormal romance debut." -Publishers Weekly (starred review) "A Certain Wolfish Charm has bite! With its sexy hero, engaging heroine, and sizzling sexual tension, you won't want to put it down even when the moon is full." -Sabrina Jeffries, New York Times bestselling author of Wed Him Before You Bed HimAbout the Books in This Bundle:

A Certain Wolfish CharmThe rules of Society can be beastly-especially when you're a werewolf and it's that irritating time of the month. Simon Westfield, the Duke of Blackmoor, is rich, powerful, and sinfully handsome, and has spent his entire life creating scandal and mayhem. It doesn't help his wolfish temper at all that Miss Lily Rutledge seems not the least bit afraid of him, and in fact, may be as untamable as he is...When Lily's beloved nephew's behavior becomes inexplicably wild, she turns to Simon, the boy's cousin and guardian, for help. But Simon's idea of assistance is far different than hers, and Lily finds herself ensconced in his house and engaged to the rogue.They both may have bitten off more than they can chew when each begins to discover the other's darkest secrets...Tall, Dark and WolfishLord Benjamin Westfield is a powerful werewolf-until one full moon when he doesn't change. His life now shattered, he rushes off to Scotland in search of the healer who can restore his inner beast, only to find she's not at all what he expected...Young, beautiful witch Elspeth Campbell will do anything to help anyone who calls upon her healing arts. Then Lord Benjamin shows up, and she suddenly discovers she may need him even more than he needs her...The Wolf Next DoorEver since their failed elopement years ago, Prisca Hawthorne has taunted, insulted, and in every way tried to push him away. If only her heart didn't break every time Lord William Westfield left her...Lord William throws himself into drinking, gambling, and debauchery and pretends not to care about Prisca at all. But when he returns to find a rival werewolf vying for her hand, he'll stop at nothing to claim the woman who should have been his all along.Can Prisca forgive the unforgivable, or are the moon-crossed lovers going to be forced into a battle of wills that could be fatal?