The Solitary House: A Novel 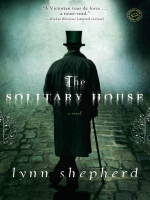 Description
Lynn Shepherd’s first acclaimed novel of historical suspense, Murder at Mansfield Park, brilliantly reimagined the time of Jane Austen. Now, in this spellbinding new triumph, she introduces an unforgettable duo of detectives into the gaslit world of Dickens.

London, 1850. Charles Maddox had been an up-and-coming officer for the Metropolitan police until a charge of insubordination abruptly ended his career. Now he works alone, struggling to eke out a living by tracking down criminals. Whenever he needs it, he has the help of his great-uncle Maddox, a legendary “thief taker,” a detective as brilliant and intuitive as they come.

On Charles’s latest case, he’ll need all the assistance he can get.

To his shock, Charles has been approached by Edward Tulkinghorn, the shadowy and feared attorney, who offers him a handsome price to do some sleuthing for a client. Powerful financier Sir Julius Cremorne has been receiving threatening letters, and Tulkinghorn wants Charles to—discreetly—find and stop whoever is responsible.

But what starts as a simple, open-and-shut case swiftly escalates into something bigger and much darker. As he cascades toward a collision with an unspeakable truth, Charles can only be aided so far by Maddox. The old man shows signs of forgetfulness and anger, symptoms of an age-related ailment that has yet to be named.

Intricately plotted and intellectually ambitious, The Solitary House is an ingenious novel that does more than spin an enthralling tale: it plumbs the mysteries of the human mind.
This eBook edition includes two complete classic novels that are referenced in The Solitary House: Charles Dickens’s Bleak House and Wilkie Collins’s The Woman in White!  This edition also includes a discussion guide and an excerpt from Lynn Shepherd's A Fatal Likeness.
Praise for The Solitary House

“Intellectually enthralling, with dark twists at every turn . . . a haunting novel that will have you guessing until the last pages.”—Historical Novels Review

“Lynn Shepherd has a knack for setting literary murder puzzles. . . . This literary magpie-ism is a treat for book lovers, a little nudge-and-a-wink here and there which delights fans of these other works without alienating those who haven’t read them yet. . . . An intelligent, gripping and beautifully written novel.”—The Scotsman

“The reader is plunged into a complex but comprehensible labyrinth of deception.”—Publishers Weekly (starred review)
Also in This Series