The hope: a novel 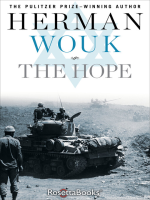 A sweeping epic of Israel from its founding to the Six-Day War, from the #1 NewYork Times-bestselling author: "Full of excitement."—Entertainment Weekly From the Pulitzer Prize-winning author of The Winds of War and The Caine Mutiny, this saga spans from 1948 to 1967, the early decades of the state of Israel as it fights for its life, outmatched and surrounded by enemies—the first of the two-part epic that concludes with The Glory. Zev Barak, Sam Pasternak, Don Kishote, and Benny Luria are all officers in the Israeli army, caught up in the sweep of history, fighting the desperate desert battles and meeting the larger-than-life personalities that shaped Israel's fight for independence. The four heroes, and the women they love, weave a compelling tapestry of individual destinies through a grand recounting of one nation's struggle against the odds. "Much of the dialogue is witty; the descriptions of back-channel diplomacy between the United States and Israel are fascinating and convincing."—The New York Times Book Review "Solid historical research...fictional characters of Wouk's own invention rub shoulders with real-life historical figures like David Ben Gurion [and] Moshe Dayan."—The Christian Science Monitor "Rich and satisfying...deftly portrays the human face of inhuman conflict."—The Cleveland Plain Dealer "An engrossing and often moving tale."—Publishers Weekly