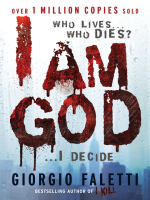 Description
A serial killer holds New York in his grip. He does not choose his victims. Nor does he watch them die. But then there are too many of them for that. The explosion of a twenty-two storey building, followed by the casual discovery of a letter, lead the police to face up to a dreadful reality: some of New York's buildings were mined at the time of their construction. But which ones? And how many? A young female detective hiding her personal demons behind a tough appearance, and a former press photographer with a past he'd rather forget, and for which he still seeks forgiveness, are the only hope of stopping this psychopath. A man who does not even claim responsibility for his actions. A man who believes himself to be God.
Also in This Series