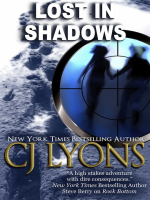 New York Times Bestseller CJ Lyons has been praised as a "Master of the Genre" (Pittsburgh Magazine) for her romantic thrillers.

Join CJ as she starts a sexy, fun-filled, adrenalin rush of a new series: Shadow Ops.

Following a group of covert operatives, men and women who risk their lives to protect our country—but are they ready to risk their hearts?

A West Virginia mountain, the middle of a blizzard, killers on his trail...no place for a city boy like Lucky Cavanaugh, an ATF explosives specialist. Out-manned, out-gunned and shot, he takes Forest Service Wildlife Biologist Vinnie Ryan hostage until he convinces her that he's one of the good guys.

Vinnie heals not only his injuries but also his broken heart. But when they uncover a terrorist plot, Lucky is forced to choose between duty and passion, risking the life of the woman he loves in order to save the lives of thousands.