What came before he shot her »

What came before he shot her 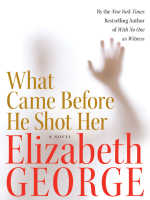 Description
Twelve-year-old Joel Campbell's father was gunned down by thugs, and his mother is confined to a mental institution. Joel and his siblings live with an unwelcoming aunt in a dangerous part of London. His 15-year-old sister, Vanessa, is trading sexual favors for drugs, and his eight-year-old brother, Toby, spends much of his time in an imaginary world called Sose. To gain protection for his vulnerable little brother, Joel gets involved with the Blade, a vicious neighborhood drug dealer. Joel is the boy who, at the end of George's last novel, "With No One as Witness", was arrested in the shooting death of Det. Peter Lynley's wife, Helen. This is an unusual sequel in that, rather than taking up where the last book left off, with the expected cast of characters -Barbara Havers, Winston Nkata, and Peter Lynley -it veers off to tell Joel's story. It's not the Lynley/Havers mystery some fans may be expecting, but it's a gripping story that, without preachiness, shows how a good child can lose his way.
Also in This Series