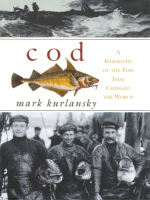 Description
Wars have been fought over it, revolutions have been spurred by it, national diets have been founded on it, economies and livelihoods have depended on it, the settlement of North America was based on it. To those it has sustained, it is a treasure more precious than gold. It is the codfish, whose story – concisely and eloquently told by Mark Kurlansky – casts a fascinating and revealing fight on world history.

COD spans a thousand years and four continents. From the extraordinary Basques, who first commercialized cod in medieval times, to Bartholomew Gosnold, who named Cape Cod in 1602, to Clarence Birdseye, who founded an industry on frozen cod in the 1930s; from 17th century cod wars to the story of how this once ubiquitous fish is today faced with extinction, dramatizing a global ecological crisis; from Nova Scotia and New England to Scandinavia, the coast of England, Brazil, and West Africa; Kurlansky tells a story that, through its narrow lens, open world history to readers in remarkable new ways.

COD is enriched by historical photographs, drawings, and artifacts, as well as a collection of recipes, from the Middle Ages to great contemporary chefs, which tell their own piece of the legacy of the codfish.
Also in This Series