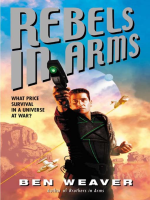 A former colonist, Scott St. Andrew escaped his hellish mining home by joining the Guard Corps and entering the most intense training program in the military. When war broke out between the Terran Alliance and the Seventeen worlds, he was forced to choose between the two warring factions—and two codes of honour. Now Guard Corps Captain St. Andrew faces his first command—to retake the South Point Academy on the hellish moon Exeter where he trained only a year before.

But the alien technology that makes St. Andrew one of the elite is faulty; he will die unless he is reconditioned properly. And only the Wardens—a secret alliance staging a coup d'etat against the Seventeen—have access to the conditioning. In the theatre of war that ensues, Captain St. Andrew faces his most difficult decision—obey the Corps' code of honour and die slowly, or join the Wardens and live?