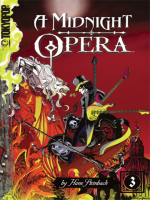 Under the Draconian leadership of Cardinal LaCroix, the Order closes in on Paris to exterminate the undead. But a link between LaCroix and the Brothers DeLaLune might have a deeper effect on the outcome of the looming battle than the scores of soldiers on both sides ready to fight. Elizabeth and Leroux have a lot to talk about—and now that Dahlia knows Ein's secret, will she still love him?

"If you have a metal head, Goth, or monster-fighting game loving friend who hasn't read much manga, pass them this one! " –ComicBookResources.com

"[Hans Steinbach] has a flair for dramatic layout...and action scenes that are visually convincing in their immediate energy. It's a promising debut." –Publishers Weekly

"In the wake of the immense popularity of The Da Vinci Code, [A Midnight Opera] should definitely find an audience." –Newtype