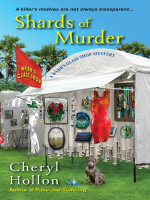 Description
"A fresh and original new series!" --Krista Davis, New York Times bestselling author When a glass-making competition turns deadly, glass shop owner Savannah Webb must search for a window into a criminal's mind ... As the new proprietor of Webb's Glass Shop, Savannah has been appointed to fill her late father's shoes as a judge for the Spinnaker Arts Festival, held in downtown St. Petersburg, Florida. With her innovative glass works, the clear winner is Megan Loyola, a student of Savannah's former mentor. But when Megan doesn't show up to accept her $25,000 award, rumors start flying. And when Savannah discovers the woman's dead body on festival grounds, the police immediately suspect her of murder. To keep from appearing before a judge herself, Savannah sorts through the broken pieces of glass scattered around the victim for clues as to who took this killer competition too far ... "Cheryl Hollon clearly knows her glass craft, but better still, she also knows how to craft a good mystery." --Sheila Connolly, New York Times bestselling author
Also in This Series