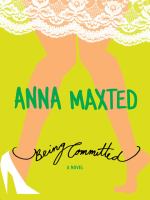 After her disaster of a marriage ends when she is just
twenty, Hannah is convinced you have to be out of your
mind (or desperate) to tie the knot. And life without a
husband at thirty-one is just fine, thank you very much.
She has a steady job working as a private investigator
(albeit a mediocre one); a devoted boyfriend of five
years, Jason; and a wonderful relationship with her dad
(it's a shame her mother is such a lost cause). Then, on
a romantic weekend retreat to a faux-ancient castle,
Jason proposes marriage, leaving Hannah with no
choice but the obvious: to turn him down cold.

Much to her horror, four weeks later, Jason becomes
engaged to his next-door neighbor, a fine baker
and "proficient seamstress." Has Hannah blown her
last chance at a solid relationship as her family
claims? Jason agrees to give her another chance -- but
only if she meets his terms, among them a promise to
dust off the many skeletons in her closet.

Brimming with her characteristic blend of humor
and heartache, Anna Maxted's Being Committed is a perceptive
look at intimacy (and its substitutes), commitment
phobia, and the power others have over us.