Jackie as Editor: The Literary Life of Jacqueline Kennedy Onassis 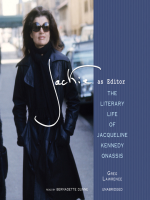 History remembers Jacqueline Kennedy Onassis as the consummate first lady, the nation's tragic widow, the tycoon's wife, and, of course, the quintessential embodiment of elegance. Her biographers, however, skip over an equally important stage in her life: her nearly twenty-year-long career as a book editor. Jackie as Editor, written by one of the authors Jackie edited, is the first book to focus exclusively on this remarkable woman's editorial career.

At the age of forty-six, one of the most famous women in the world went to work for the first time in twenty-two years. Greg Lawrence, who had three of his books edited by Jackie, draws from interviews with more than 120 of her former collaborators and acquaintances in the publishing world to examine one of the twentieth century's most enduring subjects of fascination through a new angle: her previously untouted skill in the career she chose. Over the last third of her life, Jackie would master a new industry, weather a very public professional scandal, and shepherd over a hundred books through the increasingly corporate halls of Viking and Doubleday. Away from the public eye, Jackie quietly defined life on her own terms. Jackie as Editor gives intimate new insights into the life of a complex and enigmatic woman who found fulfillment through her creative career during book publishing's legendary golden age.