Death of a neighborhood witch »

Death of a neighborhood witch 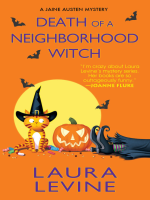 Description
"When Jaine Austen's beloved cat Prozac unwittingly scares to death a parakeet belonging to the neighbourhood's resident curmudgeon, Jaine finds herself knee-deep in toil and trouble. The cantankerous Hollywood has-been once played Cryptessa Muldoon, television's fourth most famous monster mum. Now she spends her days making enemies with everyone on the block. So when the ornery D-lister is murdered with her own Do Not Trespass sign on Halloween night, the neighbourhood fills with relief - and possible culprits. With a killer on the loose, Jaine hardly has time to fall under the spell of her yummy new neighbour, Peter. As the prime suspect, she summons her sleuthing skills to clear her name and soon discovers that everyone has a few skeletons in their closets."-- Page [4] of cover.
Also in This Series