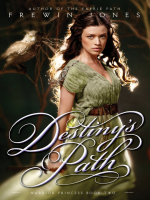 Her destiny must be fulfilled . . .

Ranwen refuses to take orders from anyone--even the Shining Ones, the ancient gods whose power is feared throughout the land. They want her as their Chosen One, destined to save her country from the Saxons. But Branwen doubts she's truly ready to be a leader.

Then a messenger from the skies shows her a vision of a bleak and violent future--a future in which Branwen has abandoned her destiny, and those most dear to her suffer unspeakable horrors. There's a blurry line between good and evil, and those Branwen trusts the most are capable of the greatest betrayal. The Shining Ones have spoken. Will Branwen answer their call?