In the Shadow of the Buddha »

In the Shadow of the Buddha: Secret Journeys, Sacred Histories, and Spiritual Discovery in Tibet 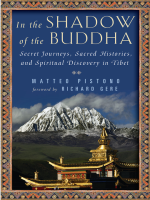 Description
Spiritual biography meets edge-of-your-seat undercover reporting: how an American Buddhist smuggled out hard evidence of abuse and torture in Tibet.
For nearly a decade, Matteo Pistono smuggled out of Tibet evidence of atrocities by the Chinese government, showing it to the U.S. government, human rights organizations, and anyone who would listen. Yet Pistono did not originally intend to fight for social justice in Tibet-he had gone there as a Buddhist pilgrim.
Disillusioned by a career in American politics, he had gone to the Himalayas looking for a simpler way of life. After encountering Buddhism in Nepal, Pistono's quest led him to Tibet and to a meditation master whose spiritual brother is Sogyal Rinpoche, bestselling author of The Tibetan Book of Living and Dying. Pistono not only became the master's student but also couriered messages to him in Tibet from the Dalai Lama in India. This began an extraordinary, and ultimately vital, adventure.
In the Shadow of the Buddha is a book about Tibet through the eyes of a devotee-a stranger hiding in plain sight. It's about how a culture's rich spiritual past is slipping away against the force of a tyrannical future. It's about how Tibetans live today, and the tenacity of their faith in the future in spite of dire repression and abuse. It's also about Pistono's own journey from being a frustrated political activist to becoming a practicing Buddhist mystic, a man who traveled thousands of miles and risked his own life to pursue freedom and peace.
Watch a Video
Also in This Series