The Sorrows of Young Werther »

The Sorrows of Young Werther 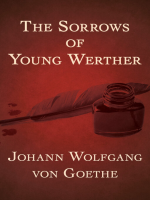 Goethe's classic story of tormented love and destruction Told through lyrical and impassioned letters to his friend Wilhelm, this novel follows the ardent young Werther to the German countryside, where he delves into artistic pursuits and basks in the simplicity of village life. But Werther's tranquility is shattered when he meets the captivating Charlotte at a ball in a nearby town. Every bit his equal in temperament and intellectual interests, Charlotte quickly becomes Werther's singular obsession. He falls inextricably in love despite her engagement to another man. Overtaken by his affection for Charlotte and unable to extricate himself from the unrequited love, Werther must make peace between his artistic temperament and the harsh realities of the world. Among the first—and most notable—examples of Germany's Sturm und Drang movement, The Sorrows of Young Werther was enormously influential upon its publication in 1774, creating a cult of personality around the tragic figure of Werther and causing a sensation in Europe's literary community. This ebook has been professionally proofread to ensure accuracy and readability on all devices.