Zero Day: The Threat In Cyberspace 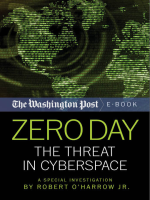 Will the world's next war be fought in cyberspace? "It's going to happen," said former National Defense University Professor Dan Kuehl. So much of the world's activity takes place on the internet now—including commerce, banking and communications—the Pentagon has declared war in cyberspace an inevitability. For more than a year, Washington Post reporter Robert O'Harrow has explored the threats proliferating in our digital universe. This ebook, Zero Day: The Threat in Cyberspace, is a compilation of that reporting. With chapters built around real people, including hackers, security researchers and corporate executives, this book will help regular people, lawmakers and businesses better understand the mind-bending challenge of keeping the internet safe from hackers and security breaches—and all out war.