Never Look Away: a thriller 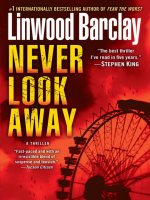 “The best thriller I’ve read in five years.”—Stephen KingA warm summer Saturday. An amusement park. David Harwood is glad to be spending some quality time with his wife and their four-year-old son. But what begins as a pleasant family outing turns into a nightmare after an inexplicable disappearance. A frantic search only leads to an even more shocking and harrowing turn of events. Until this terrifying moment, David Harwood is just a small-town reporter in need of a break. Now the only thing he cares about is restoring his family. Desperate for any clue, David dives into his own investigation—and into a web of lies and deceit. For with every new piece of evidence he uncovers, David finds more questions—and moves ever closer to a shattering truth.BONUS: This edition contains an excerpt from Linwood Barclay's The Accident.Praise for Never Look Away“Outstanding . . . The tension mounts. . . . The surprising twists and appealing characters rank this among the author’s best.”—Publishers Weekly (starred review)“The writing is crisp; the twists are jolting and completely unexpected.”—Stephen King, Entertainment Weekly “Mr. Barclay can flawlessly assume the voice of a small-town American dad.”—The New York Times “Plenty of surprises and twists.”—Seattle Post-Intelligencer