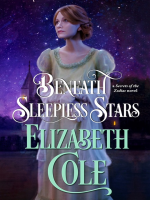 Description
Insomnia and a passion for astronomy keep Lady Violet Holloway awake all night. She's content to remain alone with her telescopes and treatises, until an unexpected marriage proposal changes everything. Though she's never met him, Violet is handed off to a lord whose name is only mentioned in whispers.Alexander Kenyon is the Duke of Dunmere...better known as the Duke of Death, after losing three wives under unusual circumstances. He's learned his lesson about the dangers of falling in love, so this marriage is purely for convenience. He has no time for a bride anyway, no matter how intriguing she is. As an agent of the Zodiac, he tasked with solving a string of perplexing murders hinting at a political conspiracy.As the stars spin overhead, the date of the next murder draws near. Violet and Alex must work together to stop it, or risk losing the life they've found together.The fifth novel in the Secrets of the Zodiac, a series of full-length historical romances: Featuring sexy storylines, complex characters, and international intrigue, set against the backdrop of the Napoleonic Wars.
Also in This Series