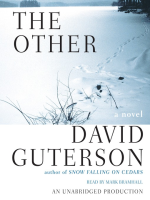 Description
From the author of the best-selling Snow Falling on Cedars, a dazzling new novel about youth and idealism, adulthood and its compromises, and two powerfully different visions of what it means to live a good life.

John William Barry has inherited the pedigree–and wealth–of two of Seattle’s elite families; Neil Countryman is blue-collar Irish. Nevertheless, when the two boys meet in 1972 at age sixteen, they’re brought together by what they have in common: a fierce intensity and a love of the outdoors that takes them together into Washington’s remote backcountry, where they must rely on their wits–and each other–to survive.

Soon after graduating from college, Neil sets out on a path that will lead him toward a life as a devoted schoolteacher and family man. But John William makes a radically different choice, dropping out of college and moving deep into the woods, convinced that it is the only way to live without hypocrisy. When John William enlists Neil to help him dis- appear completely, Neil finds himself drawn into a web of secrets and often agonizing responsibility, deceit, and tragedy–one that will finally break open with a wholly unexpected, life-altering revelation.

Riveting, deeply humane, The Other is David Guterson’s most brilliant and provocative novel to date.
Also in This Series