The Girl I Left Behind »

The Girl I Left Behind: A Narrative History of the Sixties 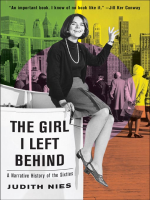 At the height of the Vietnam War protests, twenty-eight-year-old Judith Nies and her husband lived a seemingly idyllic life. Both were building their respective careers in Washington--Nies as the speechwriter and chief staffer to a core group of antiwar congressmen, her husband as a Treasury department economist. But when her husband brought home a list of questions from an FBI file with Judith's name on the front, Nies soon realized that her life was about to take a radical turn. Shocked to find herself the focus of an FBI investigation into her political activities, Nies began to reevaluate her role as grateful employee and dutiful wife.

A heartfelt memoir and a piercing social commentary, The Girl I Left Behind offers a fresh, candid look at the 1960s. Recounting Nies's courageous journey toward independence and equality, it evaluates the consequences of the feminist movement on the same women who made it happen--and on the daughters born in their wake.