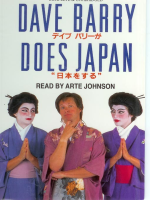 DAVE BARRY DOES JAPAN Without bothering to get approval from the President, the State Department, or even the FTC, Dave Barry's publisher sent him to Tokyo. You'd think they would have known better. Now the word is that Barry has set back our diplomatic relations with the whole Pacific Rim by a couple of decades. Japanese culture, dining, sport and industry all come under Dave's relentless scrutiny: The yawn was invented by the Japanese as a necessary reaction to their version of baseball. . . Japanese stand up comedians kneel down probably praying for laughs. . And the source of Japan's unfair advantage in auto manufacturing is . . . they use STEEL! So If you President Bush committed a social gaffe by losing his composure and his lunch in front of the Japanese Prime Minister, wait until you hear Dave's commentaries. And in the meantime, if you're planning a trip to Japan, don't leave home without Barry's pearls of wisdom about the mysterious Far East. You might want to change your itinerary!