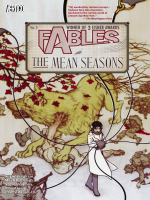 WINNER OF FOURTEEN EISNER AWARDS This volume features two tales of Bigby's exploits during World War II as well as "The Year After," which follows the aftermath of the Adversary's attempt to conquer Fabletown-including the birth of Snow White and Bigby's children! Collects issues #22 and #28-33 of creator Bill Willingham's celebrated Vertigo series.