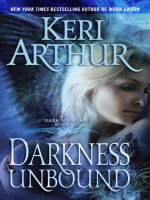 The fight against darkness rages on for the next generation--in New York Times bestselling author Keri Arthur's exciting new series set in the world of the Guardians.Being half werewolf and half Aedh, Risa Jones can enter the twilight realms between life and death and see the reapers, supernatural beings that collect the souls of the dead. But she soon makes a terrifying discovery: Some sinister force is stealing souls, preventing the dead from ever knowing the afterlife.Reapers escort souls--not snatch them--but Risa is still unnerved when a reaper shadows her in search of someone Risa has never met: her own father, an Aedh priest, who is rumored to be tampering with the gates of hell for a dark purpose. With the help of her "aunt"--half-werewolf, half-vampire Riley Jenson--and an Aedh named Lucian who may have lost his wings but none of his sex appeal, Risa must pursue whatever shadowy practitioner of blood magic is seizing souls, and somehow stop her father . . . before all hell breaks loose.From the Paperback edition.