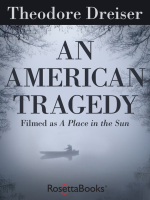 This epic of class, ambition, and murder in the early twentieth century is "[a] masterpiece...America's Crime and Punishment" (Kirkus Reviews).

Theodore Dreiser's An American Tragedy is the story of a weak-willed young man who is both a villain and a victim of the valueless, materialistic society around him. Inspired by the true story of an early twentieth-century murder and adapted into a classic film under the title A Place in the Sun, An American Tragedy follows Clyde Griffiths as he is drawn into a circle of wealthy friends despite his own poverty-stricken background. Leaving the needs of his family behind as he buys expensive presents to impress a rich girl, Clyde finds that his new life leads him into a tragedy born of recklessness. Yet he continues to yearn ambitiously for money and status—a desire that will be his downfall.

"Dreiser is widely regarded as the strongest of the novelists who have written about America as a business civilization. No one else confronted so directly the sheer intractability of American social life and institutions."—The New Yorker