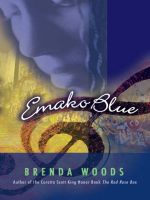 Description
Having enchanted readers with her award-winning first novel The Red Rose Box, Brenda Woods now presents the gritty story of the beautiful and ill-fated Emako Blue, who was destined to be a star.From the moment she stands up in chorus auditions and her heavenly voice fills the room, Emako Blue profoundly affects anyone who meets her. But even as Emako draws together new friends and catches the attention of an important record producer, the streets of South Central Los Angeles are never far away, where everything changes in one horrific instant.Told in the stark, contemporary voices of Emako's friends, Emako Blue boldly examines how bonds are forged and relationships can be torn apart in a world of unavoidable violence. With the same depth of characterization that marked The Red Rose Box, Brenda Woods shows a remarkable stylistic range for a second novel. Emako Blue will make you think, even as it makes you cry.
Also in This Series