Titanic: Death on the Water 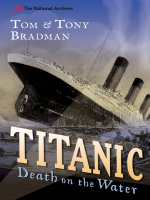 Description
Fascinating fictional retelling of the events that led to the tragedy of the Titanic , based on documents from the National Archives and written by bestselling author Tony Bradman and his son Tom.A Belfast boy is terrified of getting a job in the dockyard where the Titanic is being built, and where his father died. Instead he gets a job on the ship, where he thinks his biggest problem is his rivalry with a fellow ship's boy who calls him a coward. On the night the unsinkable ship meets the iceberg, he must find out how brave he really is.
Also in This Series