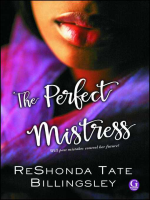 Description
The daughter of an adulterous father deals with the long-rippling effects of his actions in her own love life in this emotionally powerful novel by award-winning and national bestselling author ReShonda Tate Billingsley.
Lauren Robinson knows exactly what it takes to be the perfect mistress. She had a front-row seat when she tagged along with her father on all of his extramarital trysts. She loved "keeping Daddy's special secrets," but many family members, especially her mother, consider her an accomplice in breaking up their family.

Years later, Lauren's mother, Joyce, whose health is failing, cannot let go of the bitterness caused by her husband's philandering. She continues to blame Lauren, as does Lauren's brother. Joyce can't see past her anger and betrayal and has withheld her maternal affection from Lauren for most of her life. But this emotional distance has only made matters worse for Lauren's love life—she only dates married men.

That is until Dr. Matthew King enters the scene. Now poised to become a college president, Matthew is a former beau before she switched to married men, but he ultimately left Lauren brokenhearted. He tries to show Lauren that he's a changed man since their college days. The two truly connect and their relationship quickly escalates.

When Matthew proposes marriage, Lauren happily accepts, but as their very public engagement makes the news, someone is intent on sabotaging their relationship. Someone who watched her own marriage destroyed by Lauren and won't be happy until she gives Lauren a taste of her own medicine. Can Lauren stop the cycle of destruction in time to salvage the only love she's ever known?
Also in This Series