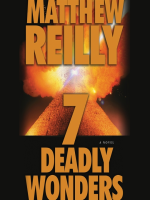 The Golden Capstone atop the Great Pyramid at Giza offered protection from the global flooding and scorching sun that occurs every 4,500 years due to the Tartarus Rotation solar event. But Alexander the Great broke the Capstone into seven pieces and hid them in the Seven Wonders of the Ancient World. Now, in 2006, another Tartarus Rotation is due, and whoever places the reconstructed Capstone on the pyramid in time will gain absolute earthly power. Everyone wants the Capstone-from the most powerful countries to terrorists-and one daring coalition of eight small nations who think that no single country should possess such awesome power.