The Dark Lord Trilogy: Labyrinth of Evil; Revenge of the Sith; Dark Lord: the Rise of Darth Vader 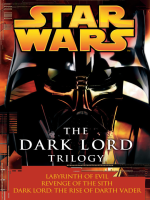 For the first time in one thrilling volume, three novels--Labyrinth of Evil, Revenge of the Sith, and Dark Lord: The Rise of Darth Vader--that follow an epic chain of events: the last days of the Republic, the creation of the Empire, and the ultimate transformation of Jedi Anakin Skywalker into the notorious Darth Vader.On the planet Neimoidia, Jedi Knights Obi-Wan Kenobi and Anakin Skywalker seize an unexpected prize: intelligence capable of leading the Republic forces to the ever-elusive Darth Sidious, who is ruthlessly orchestrating a campaign to divide and overwhelm the Jedi forces. As combat escalates across the galaxy, and Darth Sidious remains one step ahead of his pursuers, the stage is set for an explosive endgame. Tormented by unspeakable visions, Anakin edges closer to the brink of a galaxy-shaping decision, while Darth Sidious plots to strike the final staggering blow against the Republic--and to ordain a fearsome new Sith Lord: Darth Vader.Once the most powerful Knight ever known to the Jedi Order, Anakin becomes Darth Vader, a disciple of the dark side, a lord of the dreaded Sith, and the avenging right hand of the galaxy's ruthless new Emperor. As a few surviving Jedi lead a charge on a Separatist stronghold, the deadliest threat still rests in the swift and lethal crimson lightsaber of Darth Vader--behind whose brooding mask lies a shattered heart, a poisoned soul, and a cunning, twisted mind hell-bent on vengeance. For the handful of scattered Jedi hunted across space, survival is imperative if the light side of the Force is to be protected and the galaxy reclaimed. LABYRINTH OF EVILby James LucenoREVENGE OF THE SITHby Matthew Stover, based on the story and screenplay by George LucasDARK LORDThe Rise of Darth Vaderby James LucenoFeatures a bonus section following the novel that includes a primer on the Star Wars expanded universe, and over half a dozen excerpts from some of the most popular Star Wars books of the last thirty years!