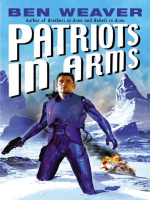 Scott St. Andrew has managed to escaped the hellish mining colony that was his homeworld, joining the Corps and fighting to save the Seventeen Worlds. Aided by an alien technology that makes him the best of the best—and simultaneously destroys him—Scott has dedicated his life to saving the free worlds. Now one of the enigmatic Wardens—a covert group that may hold the key to the saving the government—Major St. Andrew is sent back to the harsh moon where he trained, and to the alien caves that could save his life. But enemy forces and countermeasures make the mission unbelievably difficult, and divided loyalties hold the officer at a knife's edge. Scott has faced many tough decisions, but when a traitor's betrayal puts him into a POW camp, he faces the hardest choice of his life—save the woman he loves, or the world he's sworn to protect?