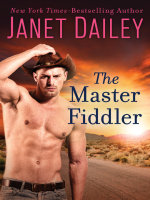 In Tombstone, Arizona, a woman surrenders to a stranger's dangerous bargain—in this steamy romance from the New York Times–bestselling author. Jacquie Grey heads west, dreaming of a life outside her wealthy father's influence, only to find herself stranded and broke in Tombstone, Arizona. She knows better than to accept the hard bargain offered by the arrogant stranger Choya Barnett. But with nowhere else to turn, she agrees to be his live-in housekeeper, despite his scandalous terms. Now Choya is about to strip her bare of all her beliefs about what a man really wants from a woman—one smoldering kiss at a time. But before the hardhearted widower sets the spoiled beauty straight, he might learn a thing or two about love. Set beneath the blue skies of a spirited western town, The Master Fiddler is the searing story of strangers battling desire as only romance legend Janet Dailey can tell it. With over 300 million books in print in nineteen languages, Dailey remains one of the world's most popular novelists.