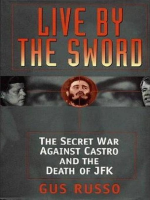 Humiliated at the Bay of Pigs, John and Robert Kennedy sought desperately to eliminate Castro. Their strategies for overthrowing the Cuban leader were so elaborate and bizarre, they could only engender paranoia. Castro openly threatened to retaliate.

Pro-Castro agitator Lee Harvey Oswald learned that Robert Kennedy was personally supervising groups plotting against the Cuban leader. Filled with rage and a sense of destiny, Oswald went to the Cuban embassy in Mexico, announcing he would kill America's president in exchange for sanctuary in Havana. Live By the Sword forces the conclusion that members of the Cuban regime accepted the troubled American's offer. Russo shows that Oswald was indeed JFK's lone assailant, but that after the president's murder, a devastated Robert Kennedy and key officials launched a comprehensive coverup to hide its true causes.Gus Russo, based in Baltimore, Maryland, has reported for acclaimed ABC and PBS documentaries on JFK, and done research for authors Gerald Posner, Seymour Hersh, and Anthony Summers. Exhaustively researched, Live by the Sword ends 35 years of public mistrust and confusion over the Kennedy assassination.