The last days of magic »

The last days of magic: A Novel 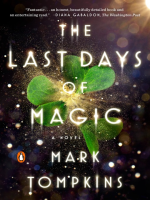 Description
"What became of magic in the world? Who needed to do away with it, and for what reasons? Drawing on myth, legend, fairy tales, and Biblical mysteries, "The Last Days of Magic" brilliantly imagines answers to these questions, sweeping us back to a world where humans and magical beings co-exist as they had for centuries."--Provided by publisher.
Aisling is a goddess in a human form, born to rule medieval Ireland and reunite the earthly realm with the Middle Kingdom home to powerful faeries. With her counselor, Liam, and her lover, Conor, she stands between warring clans of Celts, Vikings, and darkly magical otherworldly beings. But even greater forces muster beyond Ireland's enchanted shores. Jordan, a Vatican commander and clandestine student of forbidden magic, is already torn between duty and desire when he meets Najia, his captive, and a slave. Beneath the chains and spells that bind her, she is an enchantress who draws him closer to what he loves. But the Vatican and England have given Jordan a crucial role in a war they are determined to win the battle to drive magic from Ireland, and all lands, forever.
Also in This Series