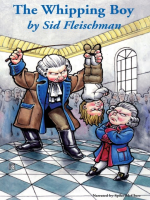 A poor orphan boy, Jemmy is plucked from the city sewers and given the worst job in the kingdom. Several times a day he is dragged from his room and given a sound thrashing, and all because of a silly rule that forbade anyone to spank, cuff, smack, or whip a prince when he's misbehaved. But someone has to be punished—that's where Jemmy comes in—and it is his misfortune to be the "Whipping Boy" for the naughtiest prince alive. So insufferable is the King's only son, that he is known high and low as "Prince Brat." Jemmy had been plotting for weeks how to get his raggedy clothes back and return to his carefree life in the streets. Then, the prince enters his room one night, and announces that he's running away and taking Jemmy with him. This is just the chance Jemmy has been waiting for, but when the two boys are kidnapped by evil highwaymen, Jemmy has to decide whether to fend for himself or the protect a hapless prince.