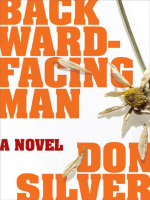 Chuck Puckman, Lorraine Nadia, and Frederick Keane came of age in the late 1960s. Like that era, their lives were mysterious, idealistic, passionate, even romantic&#8212but ultimately confused and often ineffectual. More than thirty years later, their youthful adventures continue to have ramifications: Chuck faces prosecution after an industrial accident at his family business, Lorraine's daughter is searching for the father she never knew, and Frederick has gone underground after his radical life spiraled out of control.

Epic in scope and touching on such provocative issues as Patty Hearst and the SLA, crime and the possibility of redemption, and the search for self and the meaning of life, Backward-Facing Man is a novel about choices and their lasting effects on people's lives, their families, and American society.