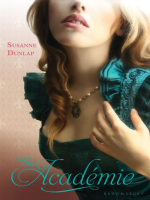 Description
When Eliza Monroe - daughter of the future president of the United States - discovers that her mother is sending her to boarding school outside of Paris, she is devestated. But Eliza is quickly reconciled to the idea when she discovers who her fellow pupils will be: Hortense de Beauharnais, daughter of Josephine Bonaparte; and Caroline Bonaparte, youngest sister of the famous French general. It doesn't take long for Eliza to figure out that the two French girls are mortal enemies - and that she's about to get caught in the middle of their schemes.

Loosely based on fact (the three girls really did attend finishing school at the same time), Eliza's coming of age provides a fascinating glimpse into the lives and histories, loves and hopes of three young women against the backdrop of one of the most volatile and exciting periods in French history.