The Inquisitor: A Medical Thriller 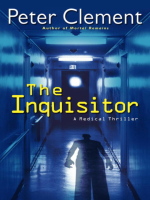 Description
It's spring in Buffalo, New York. At sprawling St. Paul's Hospital, new interns rush through the halls, staff doctors scramble to catch their protégés' mistakes, and everyone is aware of one unrelenting threat: A new and vicious strain of severe acute respiratory syndrome (SARS) has hit America hard and is menacing the hospital like a wolf at the door. Wrapped in spacesuit-like garb to search for every possible source of infection, the hospital staff desperately tries to protect the lives of patients–and of each other. Yet despite St. Paul's best efforts, people are dying.
In this chilling medical landscape, no one notices the slight spike in the death rate in a palliative care ward. The prevailing attitude is "They're supposed to die. That's why we call them terminal." When these same patients complain of terrifying near-death experiences, the hospital staff attributes it to delirium caused by medication. But when ER chief Dr. Earl Garnet gets blamed for the unexpected death of a patient, he defies protocol and opens an independent investigation. He quickly becomes suspicious that something far more sinister than disease is killing the hospital's most vulnerable patients.
For Garnet, looking into the deaths means rattling relationships that have been built over years–relationships with several men and women he once trusted but now must doubt. With the SARS epidemic spinning out of control and a storm of suspicion, fear, and mistrust raging through the corridors of St. Paul's, the hospital is rocked by a horrifying crime: A respected researcher is found brutally murdered. And his executioner may be ready to strike again.
With brilliant pacing, scalpel-sharp suspense, and an unmatched knowledge of the workings of a big-city hospital, Peter Clement is a thriller writer in a league of his own. In his new work, he takes us on a galvanizing, frightening, and constantly fascinating journey set on the front lines of medicine–where some dangers can be prevented and others can only be feared.
Also in This Series