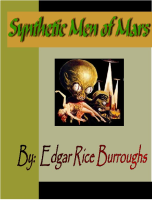 Synthetic Men of Mars is the ninth book of the Edgar Rice Burroughs Martian series, this book was featured in the newspaper Argosy Weekly in six parts released in early 1939. Dejah Thoris, princess of Helium, is badly injured in a deadly collision of two space crafts. Ras Thavas returns as the Mastermind of Mars.

Thavas creates a race of supermen on Mars that must be defeated before the entire planet faces a complete totalitarianism.

This book was written in the perfect era on the brink of a World War, when the fear of world domination was close at hand.

Please Note: This book is easy to read in true text, not scanned images that can sometimes be difficult to decipher. This eBook has bookmarks at chapter headings and is printable up to two full copies per year.