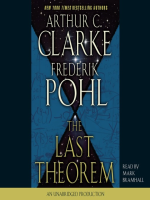 Description
When Ranjit Subramanian, a Sri Lankan with a special gift for mathematics, writes a three-page proof of Pierre de Fermat's last theorem, his achievement is hailed as a work of genius, bringing him fame and fortune. But it also brings him to the attention of the National Security Agency and a shadowy United Nations outfit called Pax per Fidem, or Peace Through Transparency, whose secretive workings belie its name. Suddenly Ranjit--together with his wife, Myra de Soyza, an expert in artificial intelligence, and their burgeoning family--finds himself swept up in world-shaking events, his genius for abstract mathematical thought put to uses that are both concrete and potentially deadly. Meanwhile, unbeknownst to anyone on Earth, an alien fleet is approaching the planet at a significant percentage of the speed of light. Their mission: to exterminate the dangerous species of primates known as homo sapiens.--From publisher description.
Also in This Series