The Flag of Freedom »

The Flag of Freedom 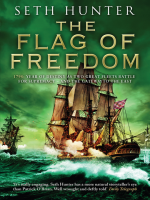 Description
1797: Britain stands alone against the forces of Revolutionary France. A victorious French Army, led by the youthful Napoleon Bonaparte, is poised to invade Britain. And in his country's darkest hour, Captain Nathan Peake finds himself imprisoned by his own side on the Rock of Gibraltar charged with treason. To prove his innocence Nathan must uncover the great deception that masks the French war aims. Is the great armada being assembled in Toulon bound for the shores of Great Britain or Egypt? His secret mission to discover the truth about Napoleon's invasion plans will hurl him into two of the greatest battles of the 18th century.
Also in This Series