The Left Hand of God » 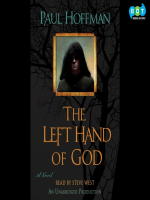 Description
"Listen. The Sanctuary of the Redeemers on Shotover Sharp is named after a damned lie, for there is little redemption that goes on there and less sanctuary."The Left Hand of God is the story of sixteen-year-old Thomas Cale, who has grown up imprisoned at the Sanctuary of the Redeemers, a fortress run by a secretive sect of warrior monks in a distant, dystopian past. He is one of thousands of boys who train all day in hand-to-hand combat, in preparation for a holy war that only the High Priests know is now imminent. He has no reason to think he's special, no idea there's another world outside the compound's walls. And then, Cale opens a door. What follows is a daring escape, an unlikely alliance, a desperate pursuit, a journey of incredible discovery, and an adventure, culminating in Cale's astonishing realization that he alone has the power to save his world--or to destroy it.
Also in This Series