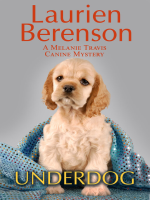 Description
Being An Underdog Can Be Murder. . . Amateur sleuth, single mother, and pedigreed poodle owner Melanie Travis returns to Connecticut's elite canine circles--and unmasks a murderer lurking among the handlers and their prize-winning pets. . . When Melanie's education in breed-handling at Connecticut's classiest obedience school is cut short by sudden death, she smells a murder. So, with her rambunctious puppy, five-year-old son, and sexy fellow breeder Sam Driver in tow, she hits the championship circuit. In this dog-eat-dog world where winning is everything, Melanie discovers that more than one suspect had a bone to pick with the victim, including a kennel owner whose secret recipe for dog biscuits isn't the only thing she's guarding. Between laps around the show ring, Melanie learns some tricks of her own. But will she learn fast enough to collar an unleashed killer who's begging for the dogged detective to play dead?
Also in This Series