A Damsel in Distress »

A Damsel in Distress 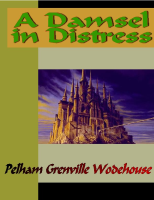 Description
P.G. Wodehouse is at his whimsical best when the characters of Belpher Castle muddle through impending catastrophes and frivolous intrigue to figure out who belongs to whom in this comedy of errors. We begin with the American George Bevan who composes musicals and is in England to attend a performance of one. After the show, Lady Patricia Maud Marsh slips into his taxi in an attempt to escape her brother, Percy, who has fashioned himself protector of the family name, and her father, Lord John Marshmoreton, whose sister, Lady Carolyn Byrd, is trying to marry Maud off to her step-son, Reginald. George suddenly witnesses the members of Belpher Castle as overbearing relatives, loutish familiars, and literary snobs in Lord Marshmoreton's idyllic home. Maud has mistaken George for another man she fell in love with earlier because of the American accent. Wodehouse's plot twists and vaunty satire portray scheming servants who make bets on the capricious attachments of the Castle's inhabitants and the aunt-dominated Earl who loves to garden and is half-heartedly writing the family history. These marvelously comic eccentrics spend their aristocratic leisure aghast and preoccupied.
Also in This Series