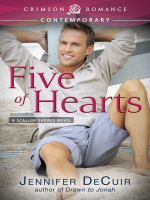 Dean was looking for a quiet place to put down new roots and leave the craziness of his old celebrity life behind him. His new house, on a rocky bluff overlooking the Atlantic, seems ideal. The only other house on the road is a summer cottage and was sure to be empty except for a few weeks during the summer. Unfortunately for him, that summer rental next door came with a year-round caretaker. A gorgeous redheaded caretaker and her three mischievous heathens.

Shannon didn�t have any use for men. Her mother raised her alone and after her ex-husband deserted her upon learning they weren�t having one baby but three at once, she was doing the single mom routine with her own triplets. Sure it got lonely being out here on the bluff, away from the rest of Scallop Shores. So she may have been a tad excited to learn someone had bought the house next door. Until that someone moved in. Looking more delicious than any man had a right to, Shannon wanted to ignore him. But her new neighbor was hiding something, and she was intrigued.

Years ago, as lead singer for the boy band Five of Hearts, Dean learned that women only wanted him for his money and fame. Not for the person he was. So he has a good reason for hiding his alter-ego from his neighbor and everyone in Scallop Shores. Right? But the closer he gets to Shannon and her children, the more he realizes he may have made a mistake in keeping the truth from them. Because a relationship requires honesty and trust to make it work. Was it too late to stop hiding and start doing a little trusting of his own?