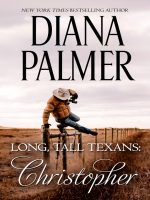 Description
In this classic Long, Tall Texans tale from New York Times bestselling author Diana Palmer, a wounded tycoon finds love in the Lone Star State. Injured years ago in a car accident, wealthy Christopher Deverell has every material item that he could ever want. But the jaded millionaire has never opened his heart to let a woman in--that is, until he's confronted by determined journalist Della Larson. The pretty young woman is looking to track down Christopher's wayward mother, Tansy, and will stop at nothing to get her story. Christopher refuses to discuss his personal life with someone who will just distort the truth, but there's something about Della that might just change his mind and convince him to open his life to what could become forever love... Originally published in 1999 as Love With a Long, Tall Texan.
Also in This Series