Where men win glory: the odyssey of Pat Tillman 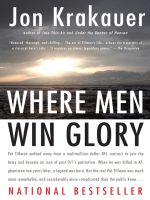 Description
NATIONAL BESTSELLER • A "gripping book about this extraordinary man who lived passionately and died unnecessarily" (USA Today) in post-9/11 Afghanistan, from the bestselling author of Into the Wild and Into Thin Air.

“Recommend[ed] to anyone who hasn’t read it, even if you’re not a football fan.”—Aaron Rogers, Green Bay Packers Quarterback, Men’s Journal

In 2002, Pat Tillman walked away from a multimillion-dollar NFL contract to join the Army and became an icon of American patriotism. When he was killed in Afghanistan two years later, a legend was born. But the real Pat Tillman was much more remarkable, and considerably more complicated than the public knew.

Sent first to Iraq—a war he would openly declare was “illegal as hell” —and eventually to Afghanistan, Tillman was driven by emotionally charged, sometimes contradictory notions of duty,...
Also in This Series