The amber room: [a novel] 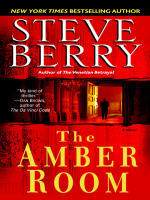 Description
BONUS: This edition contains an excerpt from Steve Berry’s The Columbus Affair. The Amber Room is one of the greatest treasures ever made by man: an entire room forged of exquisite amber, from its four massive walls to its finely crafted furniture. But it is also the subject of one of history’s most intriguing mysteries. Originally commissioned in 1701 by Frederick I of Prussia, the Room was later perfected Tsarskoe Selo, the Russian imperial city. In 1941, German troops invaded the Soviet Union, looting everything in their wake and seizing the Amber Room. When the Allies began the bombing of Germany in August 1944, the Room was hidden. And despite the best efforts of treasure hunters and art collectors from around the world, it has never been seen again. Now, two powerful men have set their best operatives loose in pursuit, and the hunt has begun once more. . . . Life is good for Atlanta judge Rachel Cutler. She loves her job, loves her kids, and remains civil to her ex-husband, Paul. But everything changes when her father, a man who survived the horrors of World War II, dies under strange circumstances—and leaves behind clues to a secret he kept his entire life . . . a secret about something called the Amber Room. Desperate to know the truth about her father’s suspicious dealings, Rachel takes off for Germany, with Paul close behind. Shortly after arriving, they find themselves involved with a cast of shadowy characters who all claim to share their quest. But as they learn more about the history of the treasure they seek, Rachel and Paul realize they’re in way over their heads. Locked in a treacherous game with ruthless professional killers and embroiled in a treasure hunt of epic proportions, Rachel and Paul suddenly find themselves on a collision course with the forces of power, evil, and history itself. A brilliant adventure and a scintillating tale of intrigue, deception, art, and murder, The Amber Room is a classic tale of suspense—and the debut of a strong new voice in the world of the international thriller.
Also in This Series